After buying some really nice bread at a nearby bakery, at the to my mind quite expensive price of 42 kroner for a loaf (about Â£4.50), I decided to bake some myself. I found a recipe on the net, and followed it pretty closely, this being the first try.

Step one, basically mix it together and knead. Okay, perhaps dissolve the yeast first in the water, and add the flour little by little. But get it mixed together, and knead well. I kneaded until my wrist started hurting, and then a bit more since it didn’t feel quite right yet. This isn’t no-knead bread.

Step two, place in a bowl, cover with a damp kitchen towel, and put in the fridge. At least 8 hours, the original recipe stated – I used a bit more, from around 17:30 to 10:30 the next day, 17 hours. By then, the dough looked about double in size.

Step three, knead the dough, and place it in a bread tray. Let the bread sit for about an hour. The dough was quite cold and tough to work, so I kneaded it until it felt a bit nicer and softer, and then let it sit in the tray at room temperature for an hour. Actually getting it into the tray proved a bit of a challenge, as the tough had gotten very springy, and didn’t want to leave the nice ball shape it was in. Some moderate physical pressure got it there in the end.

Step four, score the top of the bread with a sharp knife, and bake for about 45 minutes in a 180-190Â°C oven. As always, take care to watch it so the baking time fits your oven. I don’t yet have much experience with the oven in my new flat, and ended up with a slightly over-baked crust.

As mentioned above, I baked it slightly too long, and got a very crisp crust on the bread. Hopefully, some airtight storage will soften that up a bit. 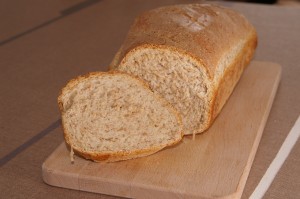 The bread tastes quite like I remember the smell of brewing beer – but in a good way. I had hoped for a result with a more developed and airy texture. All in all, I am quite satisfied with this first try at bread in the oven in my new flat, but I will have to make some adjustments to the recipe in the next try.