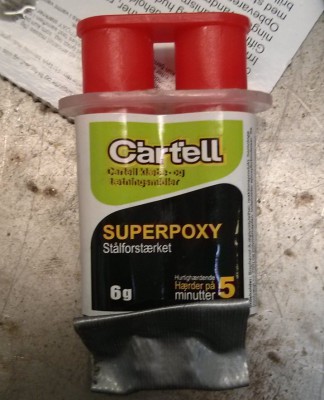 And yes, it is. Didn’t stick to the thing my friend was trying to glue with it.

A couple of weeks ago, one of my bosses came into my office with a curriculum description for a course on Oracle Beehive. He asked me to go it over, and tell me what I thought about it. After a quick flick through it, it seemed like a nice course to get some more information on the product, as it’s something we have been thinking about deploying. My boss asked me if I was available to go, March 9th through 13th. To California.

I left home at 3:00 on the 8th, where a nice friend of mine had agreed to look after my car for the week, meaning I could drive to the airport, and not have to get a bus there in the middle of the night. It turned out I was there rather too early, but early is better than late in these cases. So at just around 6:00, I was able to board an airplane for the very first time, for a quick hop to Amsterdam.

Yes, that’s right, I’d never flown before. And the flight didn’t start out too well, with what felt like rather a bumpy ride. The cabin crew seemed cheery enough, so at first I thought it was probably just normal, and wondered how I’d survive the trip across to the US – but then the captain turned on the fasten seatbelt sign, and mentioned that due to all the turbulence, he’d requested permission to fly a bit higher up. Phew! It turned out flying was a lot more comfortable than my first experience had shown, and we got to Amsterdam before time, at around 7:30.

Amsterdam airport, more correctly known as Schiphol, seemed like a nice place to be. It was certainly a lot nicer than Billund, and as I later found out, nicer than San Francisco Intl. After a couple of hours wandering about and using the wireless there (at â‚¬12/90 minutes) they finally let us board the plane – after a security check right at the gate, which seemed a very silly place to put it.

The plane for the second, much longer, half of my journey was a newly refurbished KLM MD-11. I was seated in economy, which didn’t bode well, but the plane was only about 2/3rds full, so almost noone had to sit directly next to anyone, meaning a bit more room to move about ones arms. The seats had screens in them, and once we’d gotten airborne and on the way, they were completely individual “entertainment systems”, capable of showing movies, episodes of tv-series, playing music, audio books or games, or following the in-flight tracking system.

I watched Quantum of Solace and WALL-E on the way, and enjoyed the food, snacks and drinks the very polite cabin crew were serving. The food wasn’t exactly excellent, but it was very decent, and we even got proper metal cutlery to eat it with. Sleeping wasn’t very easy, but I did manage to fall asleep for a couple of hours or so, before landing at San Francisco Intl. at about 14:25, only a short time after we’d taken off at 11:10. Okay okay, there was the small matter of the time difference on top, making it around 11 hours total … yawn.

The hotel, Sofitel San Francisco Bay, were nice enough to pick me up in their shuttle and save me the $30 cab ride, which was a nice touch. The hotel itself was very nice, and while my room wasn’t a lagoon-facing room, it still had an excellent eastward view of the sunrise over the mountains in the morning, and a by my standards huge King-size bed. Everything was nice and clean, and I even managed to unpack and hang my clothes before slipping into a more coma-like sleep.

After buying some really nice bread at a nearby bakery, at the to my mind quite expensive price of 42 kroner for a loaf (about Â£4.50), I decided to bake some myself. I found a recipe on the net, and followed it pretty closely, this being the first try.

Step one, basically mix it together and knead. Okay, perhaps dissolve the yeast first in the water, and add the flour little by little. But get it mixed together, and knead well. I kneaded until my wrist started hurting, and then a bit more since it didn’t feel quite right yet. This isn’t no-knead bread.