I couldn’t sleep. I’d been trying to sleep for a couple of hours, but nothing was really happening. Check the news, nothing. Back to bed, try to sleep, nothing.

So I decided to go for a drive, and perhaps a walk somewhere. Around town, somewhere I haven’t been in a while – in the dark, err, almost dawn. Quiet, hopefully, and might make me tired.

Not so. A fire had broken out, and I kinda stumbled upon it, a good couple of hours after the firemen had. I snapped a few quick shots with my mobile phone, and talked briefly to some of the firemen while they were resting. Apparently, no one was hurt – but like usual in such a place, no one knew for sure. 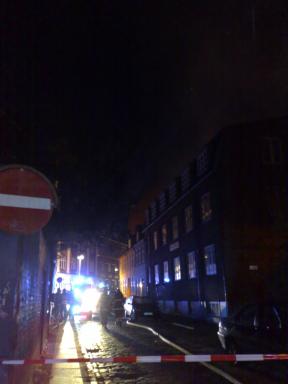 First picture shows the street as I discovered it. Okay, not entirely true – there’s a firetruck and a police car behind me with firearms andÂ 5.56 ammo at that point, and I noticed them first. You can vaguely see the building concerned, and the fact that there’s smoke in the air, but nothing much else since it’s hand-held with a mobile phone.

This picture, although shaky, clearly shows a building with the roof missing. I’m not sure if there used to be an apartment there, or if it was just the roof – but the one underneath had a fair bit of flames as well.

Two walls remain, one at each end of the building. Those are the “firewalls”, not the new-fangled electronic kind, but the good old-fashioned sturdy walls that protect your neighbours, when your building burns down. They had done their job, it seems, though the tenant at the top of the neighbouring building was heard saying he should probably find somewhere else to sleep.

The lighting isn’t me experimenting with a new-fangled extreme mobile phone flash – it’s the lighting trailer the firemen used to light up the building. The fireman manning told me it was 5000W or so, white and yellow lighting in a way that reduces shadows – supposedly, it’s really creepy walking around in there because shadows disappear, and makes the perspective go silly. 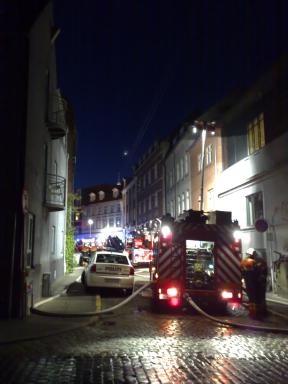 This is the street from the other end. Firetrucks and police – to the left of the camera, out of the picture, there was a water truck of some sort. To the right, lots of hoses bringing water to the pumping truck in the foreground. According to one of the people living nearby, the first fire hydrant that was tried didn’t deliver any water! I counted at least 3 water hookups when I was there, and according to one of the firemen, they’d used plenty of water. So much, that the rest of the building was likely to be unusable.

Update: I made myself a little map to show the location of the fire as well as the pictures:

Update 2: Some online newssources reported about the fire, though only in Danish:

I do hope no one was hurt, both the people who live in the building and the firemen. Also, I hope the people there didn’t get their belongings all wrecked – furniture and such are likely to have succumbed to water and smoke, but with luck, personal items have survived.

By now, it’s a quarter past 4, and not too long until I have to be out of bed again. Good night.