When you have colleagues like mine, taking a photograph of the tiramisu before it was eaten isn’t a suggestion that’s likely to be accepted – so you will have to contend with a picture of what was left: 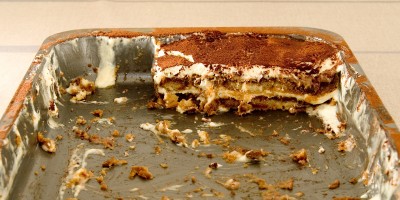 They did all enjoy it, and all my hard work yesterday wasn’t entirely wasted.

The amounts are for about 12 people, and they can probably be multiplied. You could probably halve it as well, but making much less than that is an affront to the recipe! 😉

I used 750 grams instead of the 1000 grams recommended in the book I adapted it from (Spise med Price, DR Forlag 2008). I liked the result, though some more of the cheese might be nice. It wouldn’t have fit in the tray I used anyway.

Brew the coffee, mix it with the amaretto and leave it to cool.

Mix the egg yolks, sugar and vanilla – I just added more to taste later – and whip until light and fluffy. This will take a while. Mix in the Mascarpone. Whip the egg whites and fold them in, to make the mixture lighter.

Pour the coffee mix in a flat-bottomed container, and dip the savoiardi sugar side up, so the mixture almost reaches the sugary bit – lift them up right away, and place sugar side down in the tray. Cover the entire bottom of the tray this way.

Cover, for instance with aluminium foil, and refrigerate for at least 6 hours – I had mine in the fridge for 18 before serving.

Right before serving: Dust with cocoa powder – not the sugary stuff used for making drinks, but pure cocoa. Enough should be added that it looks like a dry layer on top of the tiramisu (in my opinion, anyway).

Probably stores well, but there’s not going to be much left anyway 😉

Depending on how long you dip the savoiardi, the tiramisu will taste more or less of coffee, and be more of less mushy. Finding the right balance can be a pleasurable job, as you need to make a new tiramisu each time 😉 There’s a bit of work in making a tiramisu, but it’s lots of fun, and it tastes great. It may not be too healthy to eat it all oneself, though.

I’ve been looking to make some tiramisu, and for that I’ve decided on a recipe. It’s from “Spise med Price”, a Danish cookbook made to accompany a TV show of the same name. This recipe uses – for 6 persons – 4 egg yolks beaten with 100 grams sugar, with Mascarpone mixed in (500 grams), lightened with 4 beaten egg whites. Easy.

However, when I went to get the ladyfingers to use for the recipe, it had a different recipe. This called for – for 5 persons – 3 egg yolks, sugar and only 250 grams Mascarpone. Still the same with the egg whites.

Curiosity now piqued, I looked at my new Joy of Cooking for a recipe – and lo: 12 servings needs 5 egg yolks, half a cup whipped cream(!), and about 400 grams Mascarpone. This is quite different, since it uses whipped cream instead of the egg whites – and doesn’t seem to need as much amount of filling as the others.

I decided to press on and look at my Italian cookbooks, namely one called “Culinaria Italia” and one called (in Danish) “Italy – temptations of the Mediterranean”. The first calls for 4 egg yolks, a cup whipped cream and 500g Mascarpone, while the second (for 4 people) uses 2 egg yolks and whites and 250g Mascarpone – same proportions as the original one I looked at.

To sum up: To make tiramisu, you need a number of egg yolks and some Mascarpone, between 30 and 80 grams per person, and either whipped cream or beaten egg whites to lighten it with. And I haven’t even started to look at whether to use Marsala, Amaretto or other sorts of liquor for the ladyfingers…